Radical Ramps is the 313th episode in Candy Crush Saga and the third episode of World 63 (HTML5). This episode was released on 17 April 2019. The champion title for this episode is Funky Flipper.

Tiffi and Milly go to the park to enjoy a day of skateboarding.

Radical Ramps is a very hard episode, with a mean of 5.2. It contains two hard levels: 4673 and 4675, three very hard levels: 4674, 4677 and 4683, and two extremely hard levels: 4681 and 4684. However, the larger amount of relatively easy levels makes it much easier than the previous episode, Delicious Depths, despite having the same difficulty. 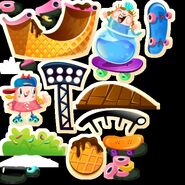 Retrieved from "https://candycrush.fandom.com/wiki/Radical_Ramps?oldid=1624215"
Community content is available under CC-BY-SA unless otherwise noted.