Rainbow Reef (Episode 380) is the 380th episode of Candy Crush Saga and the fifth and last episode of World 76 (HTML5). This episode was released on 23 October 2019. The champion title for this episode is Twisted Trimmer.

Olivia is tangled up in the rainbow twists. Tiffi uses her scissors to cut her free.

Rainbow Reef is a somewhat hard episode, with a mean of 4.27. It is special in a way that it is the first episode since Tricky Tracks, 242 episodes prior, to have a difficulty rated below "very hard." It contains two hard levels: 5689 and 5690, and two very hard levels: 5685 and 5688. Overall, it is much easier than the previous episode, Pumpkin Parade. 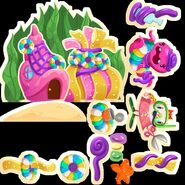 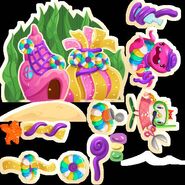 This is the 49th HTML5-exclusive episode in which the episode name is not related to food or drink in any way.

Retrieved from "https://candycrush.fandom.com/wiki/Rainbow_Reef_(Episode_380)?oldid=1614250"
Community content is available under CC-BY-SA unless otherwise noted.