The XP System (Official blog here[1]) is a mobile-exclusive feature introduced since version 1.104.0.4 of Candy Crush Saga. The XP System can be found on the top lefthand corner of the screen. Your XP Rank is represented as a number inside the golden star just below your profile picture. There is also a bar beside the XP Rank, representing your progress to the next rank.

The XP feature determines the XP rank, depending on the number of XP points you have. This feature is now available for HTML5. Completing any level will cause you to gain experience points (XP), which in turn, fills up the XP bar. Once the bar is filled, your XP rank will go up by one, and you will get a full set of lives.

It is not known whether other rewards can be obtained through leveling up, along with the individual and cumulative XP required to reach each level. Here are the estimates for the XP obtained based on the number of stars you got upon completing the level (including those you already completed).

Gain your XP rank by getting stars, score and taking the first second or third place.

Every time you reach a rank that is a multiple of five (up to Rank 40) and ten (for Rank 40 and above), you will get a new profile picture frame. There are currently 13 different frames you can obtain.

When the player clicks the frame at the top right, they will see all their statistics.

All the elements above are at the right board. The left board is the information about the player, including their country.

When the player gain rank, their frame will change at specific rank and they also get 5 free lives.

The folowing elements to gain your rank are: score, stars (at least 1), reaching the top at leaderboard (at least 1 player). 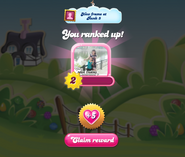 Reward (Rank 8)
Add a photo to this gallery

Progress
Add a photo to this gallery

Retrieved from "https://candycrush.fandom.com/wiki/Rank?oldid=1460423"
Community content is available under CC-BY-SA unless otherwise noted.