Rat is a minor character, which encountered firstly in Pastille Pyramid, where he had a villainous role because he took Mummy's key for opening his pyramid. Tiffi solves it giving to him a candy. After getting the candy he leaves the key.

He reappears in Dizzy Dessert, where he was juggled by the Mummy.

He also appears in the 67th episode, Candy Clouds. Before introducing level 981, he wants to go to sky, so Tiffi uses her propeller to fly to the sky with him.

He appears again in the 68th episode, Caramel Keep. Before introducing level 996, he lands on the sky with Tiffi, and he gives a key to her.

Caramel Keep (animation)
Add a photo to this gallery 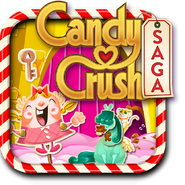 Character seen on Caramel Keep episode icon
Add a photo to this gallery
Retrieved from "https://candycrush.fandom.com/wiki/Rat?oldid=570881"
Community content is available under CC-BY-SA unless otherwise noted.