Not to be confused with the character Robby in Marmalade Moon.

Roberta is a minor character in Candy Crush Saga. He is the robot and first appears in the second episode, Candy Factory. Before introducing level 11, Tiffi encounters him who is malfunctioning. After completing level 20, Tiffi pours soda from soda machine to him and he begins to function correctly again. He goes berserk and the handle causes the glass of the soda machine to crack, filling the exterior with soda. He reappears later in the 15th episode, Sweet Surprise, where he is seen among with other characters.

He makes a cameo appearance in Syrupy Circus. He is among the spectators in the circus show.

In Scrumptious Studio, he makes another cameo, of having a sculpture in his shape in the background.

Roberta can also appear on Android and iOS devices occasionally when a player finishes a level while connected to Facebook.

In the 119th episode, Wiggly Wheel, he runs out of energy. Tiffi runs a hamster wheel generator to fully charge him.

In the 150th episode, Fizzy Factory, a power hammer in the fizzy factory broke down. Tiffi fixes the hammer by attaching a boxing glove to it. He can now continue creating tasty, fizzy drinks.

In the 201st episode, Bonbon Bash, his cakes turn out to be metallic and inedible. Tiffi adds some icing to make them taste better.

Roberta also makes a cameo in the 2nd Dreamworld episode, Funky Factory. There is no story that involves him, but he appears in the background.

Scrumptious Studio (as a sculpture) 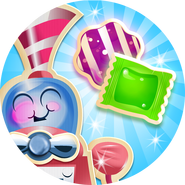 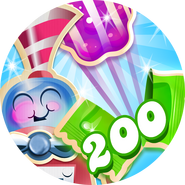 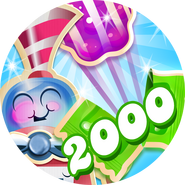 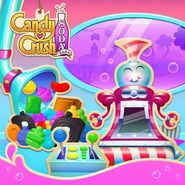