Rocky Road is the 328th episode of Candy Crush Saga and the third episode of World 66 (HTML5). This episode was released on 5 June 2019. The champion title for this episode is Marvelous Melter.

Magic Mort's magic has gone out of control, causing chocolate to explode everywhere. Tiffi melts the chocolate with her hairdryer. 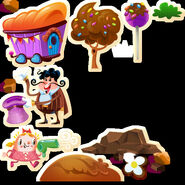 Retrieved from "https://candycrush.fandom.com/wiki/Rocky_Road?oldid=1540306"
Community content is available under CC-BY-SA unless otherwise noted.