Roulade Reception is the 392nd episode in Candy Crush Saga and the second episode of World 79 (HTML5). This episode was released on 14 November 2019. The champion title for this episode is Rug Roller.

Tiffi and Cherry Baroness make Swiss rolls by rolling strawberries and pastry down the hills. 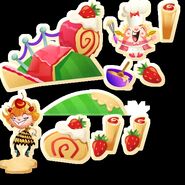