Score (or Points) is the fundamental element in Candy Crush Saga. It is a stat that is calculated during and after a level. Score will vary every time you complete a level, and every level has a score requirement to pass. Scores are normally a multiple of 20; however, getting a champion title gives the player a +10% bonus to the score upon finishing a level or running out of moves, making it possible to earn scores that are not multiples of 20, but still even. Setting off a jelly fish gives 250 points, which can yield scores that are multiples of 10. A few milestone levels (such as level 7000) have their own custom scoring algorithm, which may allow odd scores to be possible.

However, many people tend to get the score requirement but fail to complete the required tasks (depending on the type of level). Timed and Moves levels are the only types of levels that only have a score requirement without completing other tasks because score is the task in these levels. As of September 2021, both of these "score" level types have been discontinued and retired from the game.

Stars are obtained based on the score the player has at the end of the level. One is the minimum and is mandatory to pass the level, while three is the maximum.

When Swirly Steppes was released, if you clear a jelly or ingredient level without getting the required points for one star, your final score will be boosted to the one-star target score, and you will pass the level. Eventually, it was also applied to candy order levels (as of v1.73 in HTML5) and mixed mode levels. Previously, it occurred at the moment of completing the objective (i.e. removing the last jelly square).

When mystery quests were present, the scores used to be boosted to the target score in the past, but if it was between one and two-star target scores, it wasn't boosted.

(Only apply for Flash version but now was removed.)

The chart below summarizes a sample of opponents' scores from Level 1 to Level 2000, plotted on a logarithmic scale. 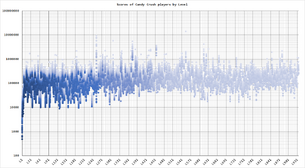 Scores of all players within matched group (1-935) 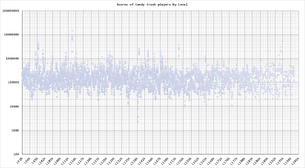