Scrumptious Sale is the 336th episode in Candy Crush Saga and the first episode of World 68 (HTML5). This episode was released on 3 July 2019. The champion title for this episode is Sensational Salesman.

Tiffi cashes in her winning ticket to get a prize from Bubblegum Troll's prize stall. 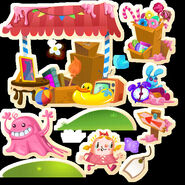