Not to be confused with Scrumptious Slopes.

Scrumptious Studio is the 106th episode in Candy Crush Saga and the first episode of World 22 (HTML5). This episode was released on 2 March 2016. The champion title for this episode is Pompous Painter.

Tiffi has painted a quite unflattering portrait of the Cherry Baroness.

Scrumptious Studio is a hard episode, with a mean of 4.67. It contains three hard levels: 1566, 1578 and 1579, two very hard levels: 1567 and 1576, and one extremely hard level: 1573. Despite fierce nerfs since it was released with a mean of 6.4, it is still much harder than the previous episode, Wacky Waterhole, due to the relatively little difficulty in said episode. 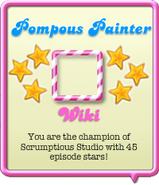