Shake Street is the 385th episode in Candy Crush Saga and the fifth and final episode of World 77 (HTML5). This episode was released on 30 October 2019. The champion title for this episode is Freaky Fixer.

Tiffi and Minty make milkshakes out of various biscuits, cakes and donuts. 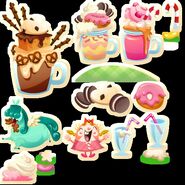