Shaky Shire is the 140th episode in Candy Crush Saga and the fifth and final episode of World 28 (HTML5). This episode was released on 26 October 2016. The champion title for this episode is Basket Boss.

Pepe wants to enjoy a picnic between the shakes (milkshakes), but has trouble getting to all the delicious snacks. Tiffi whacks the basket in a style similar to how she whacked Pepe in the episode Piñata Park.

Shaky Shire is a hard episode, with a mean of 4.53. It contains one hard level: 2081, four very hard levels: 2082, 2085, 2087, and 2090, one extremely hard level: 2078, and one nearly impossible level: 2076. Fortunately, all other levels are quite easy. Overall, this episode is much easier than the previous episode, Luscious Lane, due to the relatively high difficulty in said episode. 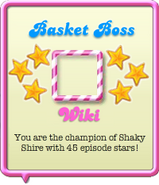 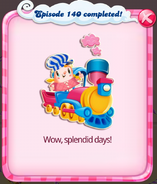 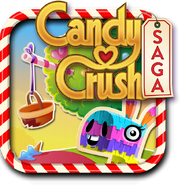