This page is about the booster. For the in-game phenomenon, see Shuffle (phenomenon).

Shuffle (also known as Mixed Paper Bag) was a booster in Candy Crush Saga. It was unlocked in level 43, but was removed for unknown reasons. However, on approximately December 7, 2015, this booster was temporarily re-released.

The booster simply generated a shuffle, which normally occurs when there are no more possible switches on the board. Activation was done in-game. The price of it before its removal was $2.90 USD. When it was added again, one could buy individuals for 3 gold bars.

For unknown reasons, only some of the players on web version could use this booster. And after Delicious Dynasty was released, this element was removed and replaced by Extra Moves.

On mobile version, it was added in v1.66, replacing the +5 moves button in Reality gameplay. However, in v1.67 this change was reverted.

Shuffles the candy on the game board. Good for boards with limited combinations 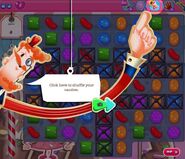 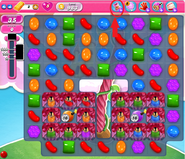 Shuffle is returned. See the red arrow and circle. 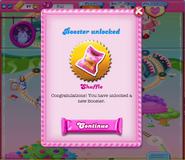 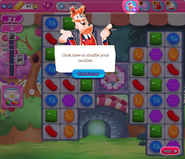 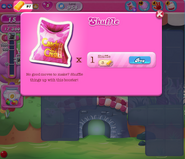 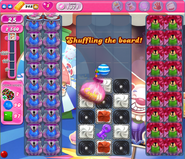 Shuffling the board!
Add a photo to this gallery

Add a photo to this gallery
Retrieved from "https://candycrush.fandom.com/wiki/Shuffle_(booster)?oldid=1394319"
Community content is available under CC-BY-SA unless otherwise noted.