Slushie Shops is the 319th episode in Candy Crush Saga and the fourth episode of World 64 (HTML5). This episode was released on 1 May 2019. The champion title for this episode is Super Sipper.

All of Giggles' ice cream has melted. Fortunately, Tiffi gets the idea to put straws in the ice cream cones and drink the melted ice cream like a milkshake. 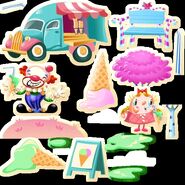