Soda Soiree is the 401st episode of Candy Crush Saga and the first episode of World 81 (HTML5). This episode was released on 4 December 2019. The champion title for this episode is Party Popper.

Pepe and Tiffi party to celebrate the New Year and the release of level 6000.

Many new things are introduced in this episode: 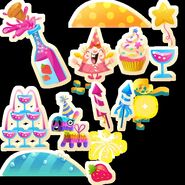 Retrieved from "https://candycrush.fandom.com/wiki/Soda_Soiree?oldid=1587764"
Community content is available under CC-BY-SA unless otherwise noted.