Soda Streams is the 299th episode in Candy Crush Saga and the fourth episode of World 60 (HTML5). This episode was released on 27 February 2019. The champion title for this episode is Bubble Buddy.

Tiffi notices that the soda has the wrong level of fizz so she has Doxen Cooper investigate the soda. 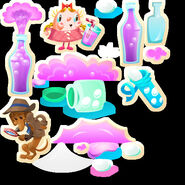