Soda Swamp is the 353rd episode in Candy Crush Saga and the third episode of World 71 (HTML5). This episode was released on 21 August 2019. The champion title for this episode is Swampy Sweetheart.

This is one of the episodes which are exact replicas of earlier episodes in both background and name. Internally, this name is intended to be Bubbling Bog. 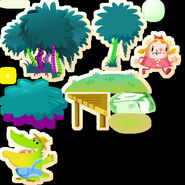