Sour Shoals is the 445th episode in Candy Crush Saga and the fifth and final episode of World 89 (HTML5). This episode was released on 18 March 2020. The champion title for this episode is Talented Tickler.

Tiffi and Jem go diving under the sea. 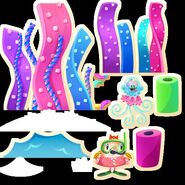