Sour Swamp is the 198th episode in Candy Crush Saga and the third episode of World 40 (HTML5). This episode was released on 22 November 2017. The champion title for this episode is Bonbon Baiter.

Bobby is trying to catch some delicious fish but only seems to be able to catch old boots. Luckily, Tiffi pops up and saves the day by filling them with some sweet treats. 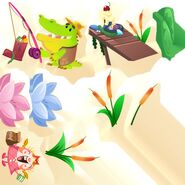