Sparkle Submarino was the 10th episode in Dreamworld and the fourth episode of World 2 of Dreamworld. This episode was released on 26 February 2014. It was the Dreamworld equivalent to the Reality episode Wafer Wharf.

Olivia relaxes in the water with water wings on her tentacles and a duck float.

Sparkle Submarino was a medium - somewhat hard episode, with a mean of 3.93. It has four somewhat hard-hard levels: 129, 134, 135, and 139 and one very hard level: 130. Overall, it was much easier than the previous one, Bonbon Baths, but slightly harder than its reality counterpart, Wafer Wharf. 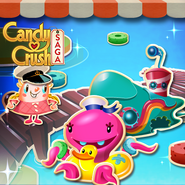 Retrieved from "https://candycrush.fandom.com/wiki/Sparkle_Submarino?oldid=1595078"
Community content is available under CC-BY-SA unless otherwise noted.