Sparkling Streams is the 329th episode in Candy Crush Saga and the fourth episode of World 66 (HTML5). This episode was released on 5 June 2019. The champion title for this episode is Soda Surfer.

Pete has converted his old barn into a soda factory. Tiffi brings a glass to the conveyor belt so she can try some of the soda. 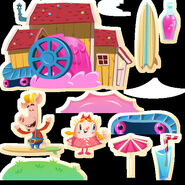