Spicy Suburbs is the 339th episode in Candy Crush Saga and the fourth episode of World 68 (HTML5). This episode was released on 10 July 2019. The champion title for this episode is Noble Neighbor.

Tiffi uses chillies to heat up the pool for Suzy. 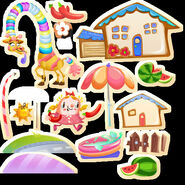