Sprinkle Steppes is the 487th episode in Candy Crush Saga and the second episode of World 98 (HTML5). This episode was released on 24 June 2020. The champion title for this episode is Straw Supplier.

This is the last episode to have its background designed that has been affected by April Fools 2020. Released after the April Fool's Day (2020) episode names went live, the original background can only be seen if you have an old version of this app.

Tiffi and Suzy drink from the waterhole with a long straw. 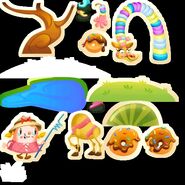 (Before candies settle and rainbows appear)

(After candies settle and rainbows appear)