Sprinkle Stronghold is the 354th episode in Candy Crush Saga and the fourth episode of World 71 (HTML5). This episode was released on 21 August 2019. The champion title for this episode is Sassy Steward.

Tiffi picks the sprinkles from the castle and uses them to decorate Nigel's hat. 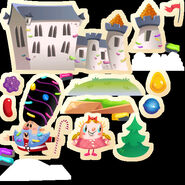