Strawberry Shire is the 255th episode in Candy Crush Saga and the fifth and final episode of World 51 (HTML5). This episode was released on 12 September 2018. The champion title for this episode is Sweet Savior.

Strawberry Shire is a nearly impossible episode, with a mean of 7.2. It contains one hard level: 3812, four extremely hard levels: 3805, 3806, 3813, and 3815, and one nearly impossible level: 3801. The rest of the levels are rated very hard, except for 3809, which is rated somewhat hard. Overall, this episode is much and much harder than the previous episode, Candied Crust. 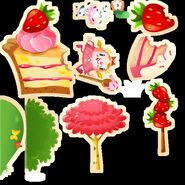