Striped Candy Contest was a contest in Candy Crush Saga that required players to collect as many striped candies as they could. This event was unlocked after players collected 10 striped candies in Dexter's Delight.

Please do note that this does not include any of the striped candies made by the colour bomb + striped candy combination.

You will compete against 29 random players. The top three people will get a prize.

In message box (Event on play)

Below top 3, no prizes
Add a photo to this gallery 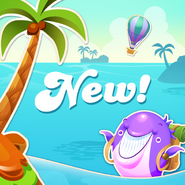