Striped brush (also known as Paintbrush) is a booster and formerly a charm in Candy Crush Saga. It is unlocked at level 37.

To activate it, one would click on a candy and it would turn said candy into a striped candy. You can choose which direction the striped candy becomes, by adjusting the mouse before clicking.

This item was previously released as a charm named Charm of Stripes. Charms were removed from the game when the 29th episode, Soda Swamp was released. However, with the release of the 104th episode, Biscuit Bay, it has returned as a single-use booster.

As a charm, the price was $40, with unlimited use (once each play) once bought. As a booster, each usage costs 15 gold bars but can be used multiple times each play.

The usefulness of this item can be negated in many later levels which render this charm too weak. It is only as strong as a Lollipop Hammer tactically. 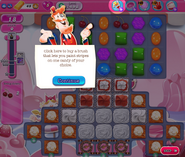 Striped brush being used on a bomb in action (vertical)

Striped brush Price (Mobile)
Add a photo to this gallery

Retrieved from "https://candycrush.fandom.com/wiki/Striped_brush?oldid=1505023"
Community content is available under CC-BY-SA unless otherwise noted.