Sugar Drop is an element that was officially introduced in Candy Crush Saga in June 2015, with this announcement on King.com's blog.

This feature allows the player to win boosters by collecting a certain number of the eponymous sugar drop candies. Sugar drops can be collected in the latest level of player progress, as well as in specific levels denoted as Sugar Track levels. The feature is activated in rounds such that once you have collected all the rewards in one round, you must wait a certain amount of time before you can use the feature again.

For all levels with sugar drops, see here (article) or here (category page).

Note: There are major changes after release of Fungi Forest.

The Sugar Drops feature was first introduced on a trial basis on April 22, 2015 and remained in A/B/N testing for a few months, before being announced and rolled out to all players. They showed variations in features to test which version is suited best for players.

During pre-release stages, some users did not have the feature, including some with advanced game progress. Users who did have the feature had different versions of it, with differences in the following areas:

The feature was significantly updated on the web interface, with the release of the 66th episode, Soda Swamp. This release included the addition of information screens on the web, as well as changes to the reward screens.

Sugar drops have the properties of ordinary candies, but they have a white band imprinted with the letter "C". Sugar drops can be collected to obtain rewards.

These candies are created in special sugar track levels, as well as in the current level of progress, but they are not truly "spawned" onto the board. Instead, when the user or a conveyor belt generates a cascade of 5 or more matches, such that Mr. Toffee can be heard saying, "Sweet", "Tasty", "Delicious", and "Divine", a stream of sparkles arc from the centre of the board, and change a standard candy at random into a sugar drop.

One sugar drop is created regardless of the size of the cascade. Cascades created in between moves, such as by the movement of a conveyor belt, a party popper from cake bomb, can also cause sugar drops to be created. Cascades during Sugar Crush do not create sugar drops, however.

When sugar drops are matched, they go into the collection jar.

Note that an already formed sugar drop cannot be converted by anything else, such as colour bomb + striped candy combination.

The latest level of your progress will always give sugar drops once per game, whether or not it is on the Sugar Track (unless it's a Timed Level on mobile). You will be able to collect sugar drops from your current level of progress just like a standard track level. When you have moved to a new level, the feature will be activated on that level. The current level of progress is displayed on the map with a Sugar Track level icon.
However, if you have failed the progress level, this feature will be disabled, until the player wins a previous Sugar Track level, or restarts the game.
After completing an episode, the Sugar Track levels of that episode will enable the feature again.
Note that if you have completed an episode but get stuck due to checkpoint or no more new levels, the final level is not counted as your current progress.

Please note that this section details the behaviour of those levels which are on the Sugar Track. The activation and deactivation characteristics herein do not apply to the current episode of progress.

Sugar track levels are shown on the map with a large icon with the letter "C" in a ring, when the Sugar Drop feature is active. These levels spawn sugar drop candies which the player can collect to obtain gifts. Sugar track levels can usually be played only once per round, after which, they are deactivated for the remainder of the round. However, when the player completes a sugar track level without collecting any sugar drops, they may be able to play the level and collect drops again. Additionally, when a player earns a reward, the last sugar track level played may often be played again. Some of these apparent inconsistencies may be due to program defects.

When you click on a sugar track level to play it, a progress bar is shown, indicating the number of candies you have collected thus far, and the number needed for the next reward.

On non-sugar track levels, the progress bar is shown, but it is grayed out. This is one way to tell if a sugar track level has been de-activated, when you fail a level and click retry to play it again. Another method is to check the progress bar after playing a level, where the bar may gray out, indicating that no more drops will be available here.

Please note that timed sugar track levels are enabled on the web version only, not on mobile.

On the mobile version, if the level chosen in mystery quests happens to be a sugar track level, you can collect sugar drops just as if you are choosing that level directly on the map. You cannot collect again if you have collected even a single sugar drop in one of your attempts, even if you failed the level, but this can be thwarted if you quit the application.

On the web version, the collection jar is located below the objective list (ingredients, orders, etc.). On mobile, it is located in the same position as the moon scale in Dreamworld.

During play, sugar drop candies matched are collected in the jar. The number of candies collected is displayed on the jar. At the end of the level, whether you pass it or not, the sugar drops from the collection jar get added to the total needed for the next reward. One must go to the Level cleared or failure screen to collect them.

Typically, the player is credited one sugar drop for every one collected. However, for some reason, web version players can earn double amount of drops if they manage to pass the level. For example, one plays level 666 on web version, collects 46 drops and beats the level, his/her collection will be added by 92, which can result in gaining three rewards.

An update in mid-January 2020 added a limit of up to 5 sugar drops able to appear per level.

In most of the versions, the player is forced to move to reward screen after ending a level. A temporal update from November 2019 to December 2019 allowed players to claim rewards anytime they want, from the top of power up tab.

At the reward screen, the sugar drops are poured from the collection jar into a mechanical contraption, which mixes them up. A gift box then pops out, and instantly opens to show the boosters won, but you must press the Claim reward button to add these to your supply of boosters. The next screen confirms the boosters have been added. You must then press the Sweet! button to resume game play.

If you have more than one set of rewards to be claimed (either by collecting enough drops for multiple rewards, or by mobile device being offline during collection), all rewards will be claimed together.

On mobile version, you must connect to internet in order to claim rewards. Otherwise the gift box will not open.

Once the final reward of the round has been claimed, the Sugar Drop feature is deactivated. Currently, the cool down is 8 hours, although there were variations in previous releases. During this time, the sugar drop section in power up tab displays a timer indicating the amount of time remaining before the feature is reactivated. The cool-down period syncs between web version and mobile device (when connected to internet).

If you have collected too many drops beyond the final reward, those drops will be kept for the next track, but only up to one less than the requirement of first reward.

Purple Candy Sugar Drop
Add a photo to this gallery

Order track level (mobile)
Add a photo to this gallery 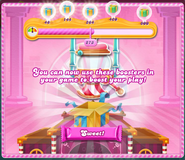 A speech good luck for players when they got rewards. 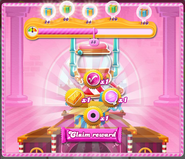 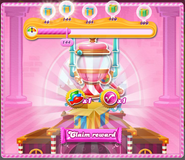 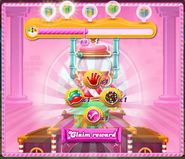 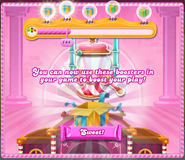 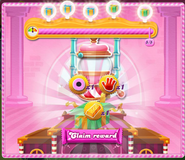 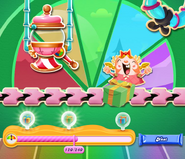 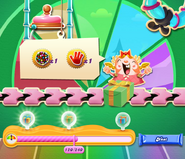 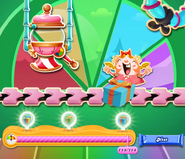 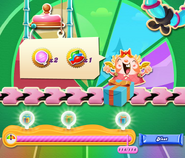 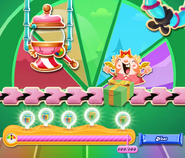 Sugar Drop description
Add a photo to this gallery 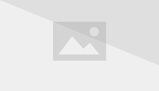 A glitched hex level with drops

Levels with Sugar Drops on mobile

Layout on mobile version. Look at the rightmost green candy.

Pay attention to the number of sugar drops collected. 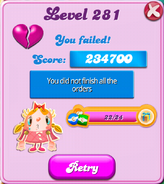 Failing the level 281 shown above but all the sugar drops are kept.

The first rewarding moving down the conveyor belt (old).

Opening the reward (new). Note that the process is automatic.

An advice telling players that they can use the rewards they won in levels.

There are 5 stages of rewards, which require you to be online to claim (old).

There are 5 stages of rewards, which require you to be online to claim (new).

During a colour bomb + orange triped combination, the Sugar Drop below stays put. 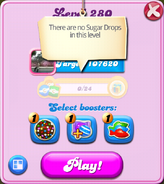 You cannot collect sugar drops in a non-Sugar Track level 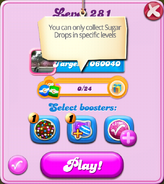 3. 1st set reward, supposed to be collected when 35 sugar drops are earned, is collected (mobile version 1.61) 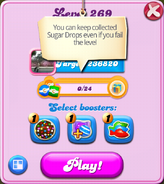 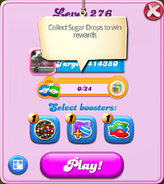 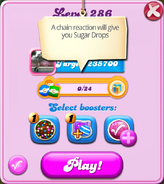 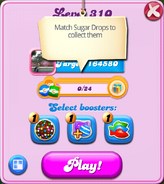 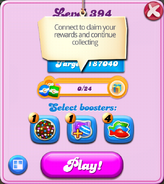 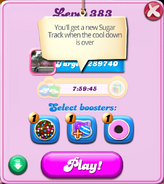 New Sugar Track is here
Add a photo to this gallery 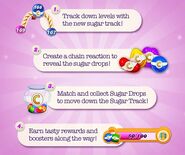 Sugar Drop jar
Add a photo to this gallery