This page is about the keys that unlock sugar chests. For more on the sugar chests themselves, see the Sugar Chest page.

A sugar key is an element that was introduced in the 49th episode, Boneyard Bonanza. It always occurs in conjunction with a sugar chest. They start to appear since level 711 and will always appear along with sugar chests.

Sugar keys are key-shaped candies, which can be swapped, matched, and destroyed like regular candies. However, they cannot be combined with any special candies. Sugar keys come in different colours, like a normal candy. Sugar keys can also come out of dispensers, as in level 714 (level 501 unofficially due to a redesign).

The keys come unlock chests that have one to five layers of locks: one lock hole, one crumbled biscuit, and then three layers of icing. Every time a sugar key is destroyed, a layer of lock on all of the chests is removed. When the last layer of a chest is removed, the chest is broken and the content in it is free. The chests can contain candy or a blocker (which is sometimes above a jelly square) or an ingredient.

If a combination converts sugar keys of target colour into special candies, all chests will lose one layer. If chocolate eats a key, a layer from all sugar chests will also disappear.

After opening all chests, the remaining keys will act as follows: 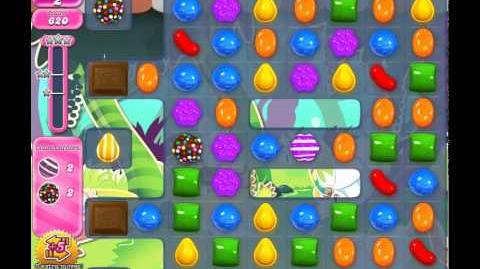 Candy Crush Saga Level 976 (No booster, 3 Stars)
The sugar key becomes a regular candy at 0:21 after the sugar chests are opened at 0:20

A green key stays after opening all chests (level 719, mobile before v1.70)