Sugar Shacks is the 282nd episode in Candy Crush Saga and the second episode of World 57 (HTML5). This episode was released on 26 December 2018. The champion title for this episode is Sweets Supplier.

Tiffi and Milly come to the shacks to dry off and rest after a day of swimming. 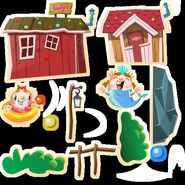