Sugary Shire is the 369th episode in Candy Crush Saga and the fourth episode of World 74 (HTML5). This episode was released on 25 September 2019. The champion title for this episode is Candy Cleaner.

This is one of the episodes which are exact replicas of earlier episodes in both background and name. Internally, the episode name is Glorious Glade.

Tiffi gathers up all the candies stuck in the bushes for Ramsay. 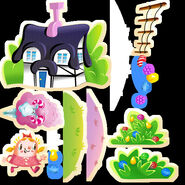