Sugary Showroom is the 398th episode of Candy Crush Saga and the third episode of World 80 (HTML5). This episode was released on 27 November 2019. The champion title for this episode is Daring Detective.

Tiffi and Doxen Cooper investigate a possible theft in the jewellery shop. 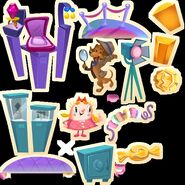 Retrieved from "https://candycrush.fandom.com/wiki/Sugary_Showroom?oldid=1614255"
Community content is available under CC-BY-SA unless otherwise noted.