Sugary Skies is the 442nd episode in Candy Crush Saga and the second episode of World 89 (HTML5). This episode was released on 11 March 2020. The champion title for this episode is Airborne Amigo.

Tiffi soars over the clouds with Coco and his father. 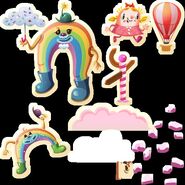