Sugary Stands is the 365th episode in Candy Crush Saga and the fifth and final episode of World 73 (HTML5). This episode was released on 18 September 2019. The champion title for this episode is Grandiose Griller.

Tiffi and Mr. Yeti cook candy kebabs at the fair. 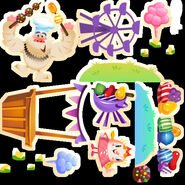