Sugary Steeple is the 430th episode in Candy Crush Saga and the fifth and last episode of World 86 (HTML5). This episode was released on 12 February 2020. The champion title for this episode is Rambunctious Rumbler.

Using her megaphone, Tiffi calls Mr. Yeti down from the clock tower. 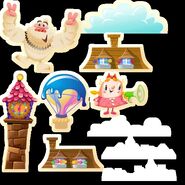 Retrieved from "https://candycrush.fandom.com/wiki/Sugary_Steeple?oldid=1614266"
Community content is available under CC-BY-SA unless otherwise noted.