Like hexagon levels, the list of super hard levels is dynamic and are usually updated at a weekly basis.

However, just like any other hard level, not all super hard levels are usually the hardest. Examples are 395 (rated somewhat easy) and 1600 (rated medium).

A Thunderstorm Level (374) and several Hexagon Levels in Mobile. Note they are shown as skulls in other King games. 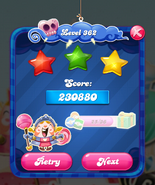 New version of outro
Add a photo to this gallery
Retrieved from "https://candycrush.fandom.com/wiki/Super_Hard_level?oldid=1530293"
Community content is available under CC-BY-SA unless otherwise noted.