Sweet Beat was the 36th episode in Dreamworld and the sixth and final episode of World 6 of Dreamworld. This episode was released on 29 December 2014. It was the Dreamworld equivalent to the Reality episode Sour Salon.

Tiffi and the organist wear Daft Punk helmets and have a dance party.

Sweet Beat is a easy episode, with a mean of 2.6, as it contains many easy levels. There is one somewhat hard level: 517, and a hard level: 529. Levels 520 and 527 can also be quite tricky, but not too hard, and quite doable. Overall, this episode is slightly easier than the previous episode, Gelato Grotto and much easier than its Reality counterpart, Sour Salon. 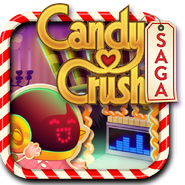 Retrieved from "https://candycrush.fandom.com/wiki/Sweet_Beat?oldid=1619412"
Community content is available under CC-BY-SA unless otherwise noted.