Sweet Surprise is the 15th episode in Candy Crush Saga and the fifth and final episode of World 3 (HTML5). This episode was released on 11 October 2012. The champion title for this episode is Party Queen.

Before episode:
Tiffi enters the scene but is totally confused, as no one is around!
After episode:
All the characters previously introduced except for Mr. Yeti appear by jumping out. At first, Tiffi is startled, but then she's extremely happy as everyone has come to celebrate her good deeds! Suddenly, Bubblegum Troll popped out of the cake and Olivia yells, "GET HIIIIIIIIIMM!".

Sweet Surprise is a very easy episode, with a mean of 1.6. Only one level can be tricky: 212. Overall, this episode is MUCH easier than the previous episode, Caramel Cove.

A cake in the middle of nowhere? 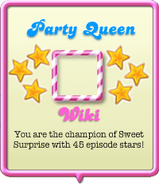 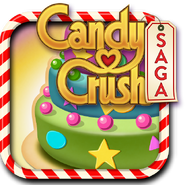