Syrup Square is the 193rd episode in Candy Crush Saga and the third episode of World 39 (HTML5). This episode was released on 25 October 2017 on Windows 10 App version and 1 November 2017 on Facebook version. The champion title for this episode is Pastry Plumber.

Boomer is devastated because the roofs in the village are running out of syrup. Tiffi builds a magnificent syrup fountain which spouts enough syrup for the whole valley. 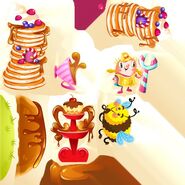