Taffy Treetops is the 113th episode in Candy Crush Saga and the third episode of World 23 (HTML5). This episode was released on 20 April 2016. The champion title for this episode is Fungus Fixer.

Odus is happy that Tiffi fixed his house, which had a leak in the roof. 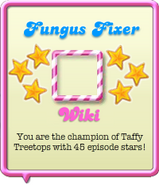