Tangy Tracks is the 298th episode in Candy Crush Saga and the third episode of World 60 (HTML5). This episode was released on 20 February 2019. The champion title for this episode is Crafty Conductor.

Casey mans the controls as Tiffi rides the rollercoaster. 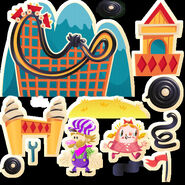