Toasty Terrain is the 209th episode in Candy Crush Saga and the fourth episode of World 42 (HTML5). This episode was released on 31 January 2018. The champion title for this episode is Marmalade Muncher.

Suzy is making toast and needs something to make it more tasty. Tiffi helps her out by creating cracks on the ground, revealing marmalade to use for the toast. 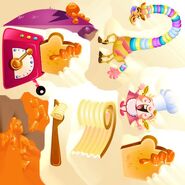