Toffee Teasprings is the 108th episode in Candy Crush Saga and the third episode of World 22 (HTML5). This episode was released on 16 March 2016. The champion title for this episode is Super Scrubber.

The Bubblegum Troll had been dirty during his travel, and Tiffi gives him a good scrubbing at the Toffee Teasprings. 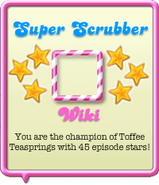 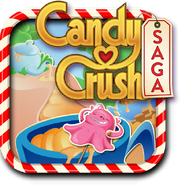