The toffee tornado was a tough blocker in Candy Crush Saga. They first appeared in level 411 as the new element introduced in the 29th episode, Soda Swamp. Toffee tornadoes started off looking like normal candies, however after the level's objective had been announced they turned into tornadoes. On mobile devices, they instead emerged from a crack already onscreen.

All toffee tornadoes were removed from standard levels in late 2015 after the release of Hoax Hollow, after 3 nerfs. However, toffee tornadoes continued to make occasional appearances in events well into 2016. The last appearance was from the Secret Cave of August 23, 2016.

Toffee tornadoes were the rarest blockers in the game. Only 27 levels in Reality and 18 in Dreamworld (which was later similarly removed) ever had toffee tornadoes before their removal. They formerly appeared frequently in Soda Swamp and Rainbow Runway, but appeared very rarely afterwards, with only a few of them appearing somewhere in World Ten to Twelve.

All toffee tornadoes were removed from normal levels. It may only be present in special levels featured in mobile events (it happened only once).

For the list of past versions of levels that had this blocker, see here.

Toffee Tornadoes were considered one of the most hated blockers and elements in the game. They received 3 major nerfs before their final removal.

A crack on a jelly

A crack on a double jelly

A Tornado on a sachet

A Tornado on 2-layered icing

A Tornado on 3-layered icing

A tornado on a single jelly 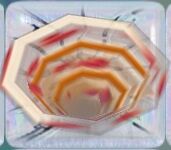 A tornado on a double jelly 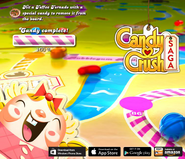 How to deal with toffee tornadoes. This message used to appear before the removal of this blocker.
Community content is available under CC-BY-SA unless otherwise noted.
Advertisement