Tomas is a minor character in Candy Crush Saga. He is a kangaroo and encountered in the 59th episode, Truffle Terrace. Before introducing level 861, he is crying because his hat was stolen by the Cherry Baroness. After completing level 875, Tiffi gives Tomas a new hat, and he becomes happy again.

Hey! Give it back to me! (before story)

The Cherry Baroness stole my hat! (before story)

Lovely! Thank you for the new hat! (after story) 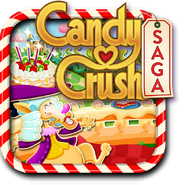 Character seen on Truffle Terrace episode icon
Add a photo to this gallery
Retrieved from "https://candycrush.fandom.com/wiki/Tomas?oldid=1596506"
Community content is available under CC-BY-SA unless otherwise noted.