Tommy is a minor recurring character in Candy Crush Saga. He is a mummy who encountered the 12th episode, Pastille Pyramid, Before introducing level 156, he is encountered locked out of his pyramid. Tiffi agrees to help him find a way back in. After completing level 170, a creature is found with the key, and Tiffi gives it back to Tommy who is extremely satisfied.

He reappears in the 15th episode, Sweet Surprise where he's found along with other characters.

In Peppermint Party, he joins to celebrate New Year's Day!

In the 125th episode, Peanut Pass, he is stuck on a branch, and Tiffi brings a giant marshmallow so he can jump down safely.

In the 202nd episode, Breakfast Bay, he wakes up in his bedroom in the middle of the ocean, much because of his dismay. Tiffi cheers him up by bringing him a delicious breakfast.

In the 12th Dreamworld episode, Dizzy Dessert, Tommy juggles a rat and some balls.

Peanut Pass
Add a photo to this gallery

Character on map (Breakfast Bay)
Add a photo to this gallery 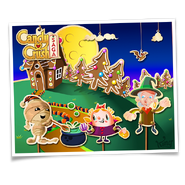 Tommy in Halloween day image
Add a photo to this gallery
Retrieved from "https://candycrush.fandom.com/wiki/Tommy?oldid=1616298"
Community content is available under CC-BY-SA unless otherwise noted.