Treasure Tropics is the 304th episode in Candy Crush Saga and the fourth episode of World 61 (HTML5). This episode was released on 13 March 2019. The champion title for this episode is Balloon Buster.

Tiffi and Captain Sweet Tooth have a party to celebrate them finding the treasure chest. 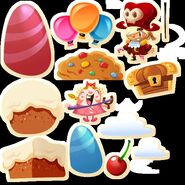