Tricky Tower is the 191st episode in Candy Crush Saga and the first episode of World 39 (HTML5). This episode was released on 18 October 2017. The champion title for this episode is Tasty Tracker.

Georgina needs to reach the tower, but it's not easy to find in the tangled woods. Tiffi drops some bright candies to show him the path. 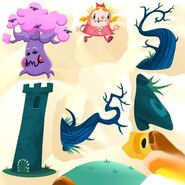