Tropical Terrain is the 425th episode in Candy Crush Saga and the fifth and final episode of World 85 (HTML5). This episode was released on 29 January 2020. The champion title for this episode is Banana Bringer.

Tiffi helps the Monkey get bananas from the tree. 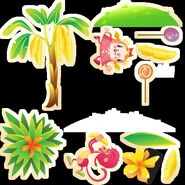