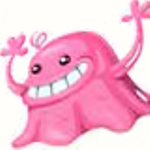 aka the Bubblegum Troll

Hello and welcome! I started playing Candy Crush Saga in the summer 2013 and has been hooked ever since. I am currently on Level 323 and on Level 28 in Dreamworld.

Please visit my sandbox and feel free to give me some feedback.

NOTE: English is not my mother tongue!

I started to play Candy Crush Saga in June 2013 on my phone. The sweetness of the game got me addicted instantly! When I replaced my phone the game wasn't available anymore. Luckily I had connected it to my Facebook account where I continued my adventure!

Bubblegum Troll (character) - without doubt! I say like King.com - "he’s just so creepy and awesome"

“Ahh, smells like candy!” - It is I who possess this wonderful bag of candy now Tiffi! You just have to accept that fact...

“Help! Help! Gumzilla! Gumzilla is wrecking the Pudding Pagoda! Stop him!” - That cat doesn't understand anything...

“The Bubblegum Troll blocked the tracks with chocolate, I can’t pass it!” - How can someone not like chocolate? Seriously?!

Here are some levels which I remember being hard and/or with a lot of failed attempts. I might think some of these levels are not as hard as they was in the beginning. I know I have forgot a lot of hard levels...

Please visit my sandbox to see the drafts!

Lurking under the Bubblegum Bridge...

"The monster uses his extendable arm to reach in and steal the basket of candy from Toffette..." I'm not a monster! How dare you!?

What a sweet surprise!

Please don't call me a loser...

...because I'm not the one who was robbed of candy - twice!

Yummy!!
Add a photo to this gallery
Retrieved from "https://candycrush.fandom.com/wiki/User:Liquoritz?oldid=1084099"
Community content is available under CC-BY-SA unless otherwise noted.